Southland track cycling is a national success story that we are generally a bit too humble to talk about.

This community built New Zealand's first covered velodrome, we develop and attract some of the best fixed-wheel riders, coaches and officials in the country and the sport has a volunteer base which other regions can only marvel at.

Our future as a powerhouse in the sport looks assured going by the evidence provided by the national age group championships campaign in Cambridge, which produced 56 individual medals, two national records and almost every rider setting personal best times. 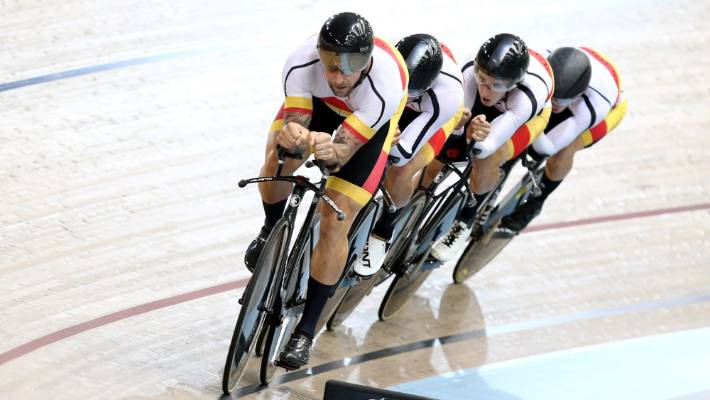 New Zealand sprinter Eddie Dawkins makes a rare appearance in an endurance event, leading out the Southland team in the men's team pursuit at the elite track nationals in February.

Under 15s coach Don Frew said the development of junior riders within the Southland centre had been remarkable over the past couple of years - with half of his squad competing at their first national event.

"They did themselves proud with every single rider achieving a personal best time and medals featuring for Marshall Erwood and Caitlin Kelly in the individual events.

"The kids' commitment to their training over recent months really showed at the event and they can all be super proud of what they achieved," Frew said.

Under 17 coach Gerald Paterson's 15-strong squad had some massive fields to compete against, including some very strong up-and-coming junior talent.

"To me this was the most successful year ever by our age groups, across all races and by all ages.

"Jessica Spencer, Rhylee Akeroyd and Mitchel Fitzsimons all had notably good campaigns up the road, but all our crew really rode to the very best of their ability, which is what it is all about at the end of the day," Paterson said.

Meanwhile, in the masters' category, James Jubb had a stellar second hit out securing four medals in the MM1 category.

His best result came on the first day when he set a new national record twice in the 1000m time trial in both the qualifying heat and the final in a time of 1.07.961.

Fellow masters riders Tienke Venter secured three gold and two silver across her rides and international champion Erin Criglington continued her winning form picking up three gold in the sprint events and three silver in the other races.

Neil Familton also had a highly successful few days, including a new national record in the MM6 2000m individual pursuit. Familton also took gold in the scratch and silver in the time trial.

This included a seven-medal haul from under 19 rider Emily Paterson, who has just been named, along with Conor Shearing, in the Cycling New Zealand team to compete at the Junior Worlds Track Championships in Germany, in August.

"Eddie Dawkins, Natasha Hansen, Kirstie James, Nick Kergozou, Tom Sexton and Brad Knipe were on-form as always and it was unfortunate for Natasha to get taken out of the competition in a nasty keirin accident – that's always very unlucky."

"People still talk about it even now. The last thing everyone expected to see was the third-lap Kiwi sprinter take the lead out spot on the front of our four-man pursuit team. But he started off the front and man did it work."

"Being able to train and hone their skills here is reflected in the level they can perform to, both nationally and internationally, as well as the ongoing growth in our junior rider ranks.

"The Southland team pit at nationals is always the envy of other riders at these events – the camaraderie, care for fellow riders and support systems that are put in place ensure our riders can perform to the very best of their ability and that is paramount during competition." Wills said.

For the juniors the next event will see them move off the track for the Otago-Southland Schools Road Champs being held at Myross Bush on 27 March and several U17s and over will be racing in the inaugural Vital Signs Fight for Yellow Two Day Tour around Eastern Southland on March 30 and 31.

The 2023 edition of the SBS Bank Tour of Southland will take place from 29 October to 4 November.
In the 2022 edition of New Zealand's most successful multi-stage road race, Josh Burnett (Creation Signs - MitoQ) took the title, becoming the first Southlander to claim the prestigious title since 1994. Read more ...

The 2023 Yunca Junior Tour of Southland returns to the roads of Southland from 29 September to 1 October, featuring six stages over three days.