On the side of a field in France a girl stands proudly beside a sign declaring support for Invercargill cyclist Tom Scully.

The Skud, as he's known, is the first Southland cyclist to take part in the international Tour de France.

He is riding for the United States team EF Education First-Drapac P/B Cannondale - nicknamed Pink Argyle - from July 7 to 29. 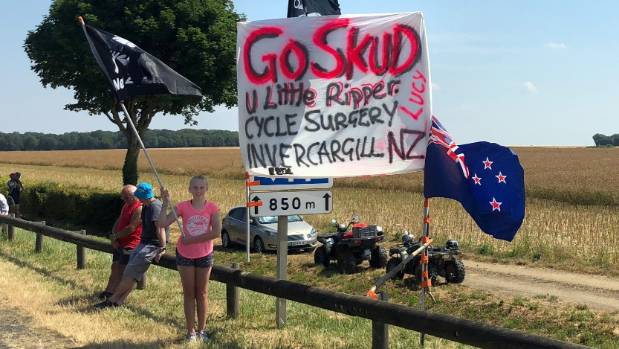 The sign proudly says "Go Skud, U little Ripper" is probably as Kiwi as it gets in France.

Proud dad Matt Scully said he had been getting up during the night to follow the coverage on television closely.

Working during the day on little sleep was a price he was willing to pay to support his son, he said.

The team has finished stage 9 of the competition in Roubaix, and tomorrow will be a rest day.

"A minute down on some of the top contenders is not what we wanted. It’s only day nine. We have 21 days. It’s early yet. [...] It’s a small step backwards, but we’re still aiming for the overall goal of supporting Rigo in the general classification." - @tomscullytwiter pic.twitter.com/elkS67c8A0

When asked how he felt about watching his son compete among the worlds top cyclists, with millions of people watching internationally, Matt Scully said: "It's quite unbelievable really".

The competition was hard and the days were long, but Tom was enjoying riding alongside the top cyclists from throughout the world, his father said.

"He loves it and is enjoying every day of it.

"It's just self discipline to get there and never have given up and stuck at it. There was a time I didn't think he'd get there but you make your own luck in life ... he's put himself in a position to make his own luck and kept at it."

Cycle Surgery Invercargill owner Glen Thomson said he had stayed up watching the competition on television and was proud of the Southland riders success so far.

"I've known him since he was a kid and he deserves it. He's trained so hard, and like most top athletes, it's been a hard road to get there."

Tom Scully had come back from a knee injury several years ago.

His job on the team was "not the most glamorous" but he had been doing a good job, Thomson said.

"There's no soft riders [in the Tour de France], you've got to be the best."

After stage 9, team leader Rigoberto Uran ranked in position 22 in the general classification. Tom was 121, but his position was not the goal, his role was to push the leader into a top position, Thomson said.